2022 Industry Trends: An Interview with a former President of the AWS 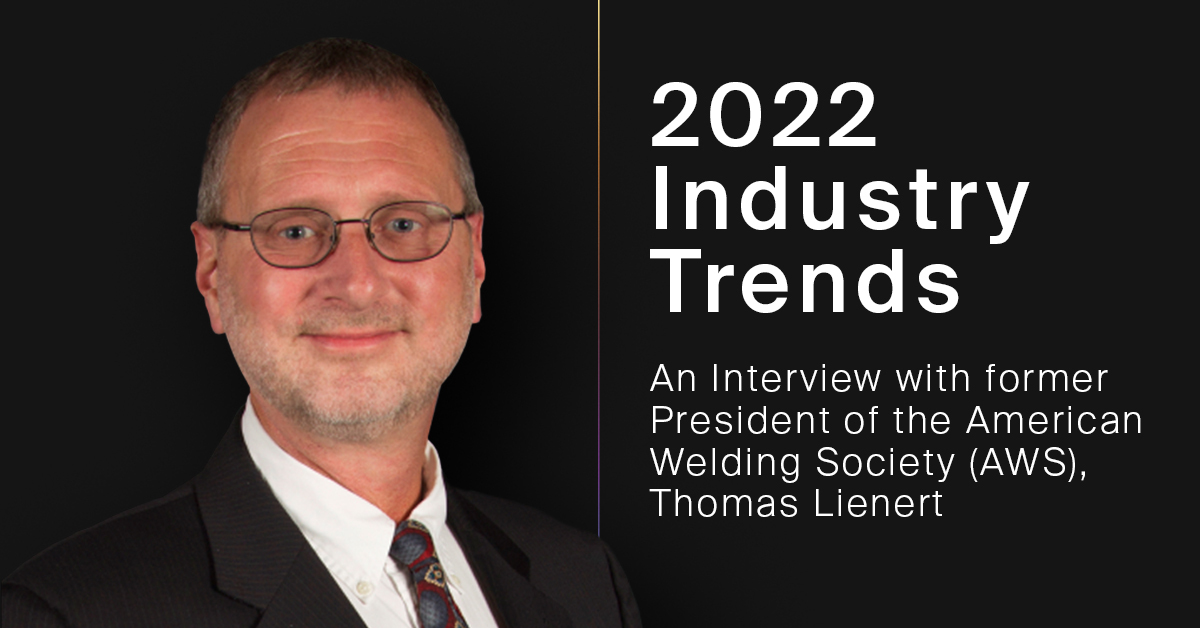 Matthew Wolfe of Path Robotics recently sat down with Thomas Lienert, Past President (2019) of the American Welding Society (AWS), to connect on industry trends and how they’re impacting the welding industry.

Tom was formerly a Technical Staff Member and an R&D Engineer at Los Alamos National Laboratory for more than 16 years. He is also an active member and officer of several national-level AWS committees, has served as chairman of the AWS New Mexico Section, and has been named an AWS Fellow.

Matthew Wolfe: What do you see as the most transformative technology in the welding industry?

Thomas Lienert: Cobots are a big thing right now. Automation has often been under-appreciated. Many manufacturers are coming out of the pandemic and are unable to hire welders, which compounds the existing issues across the whole supply chain. The just-in-time kind of approach that used to be the way this country operated will have to be altered, and soon. Cobots are going to help with that. Some jobs will come back and re-shore to the US - I think Cobots will help with that as well.

Power supplies are another transformative technology. For example, there are the new Fronius power supplies with cold metal transfer or CMT. People seem to be buying lots and lots of them. And I think that's going to be helpful with its controlled waveforms. You can do a lot of fancy stuff even if you don't understand what you're doing. That's a big thing right now.

Those are the top two that hit me off the top of my head. Automation use will have to increase to offset the welder shortage and supply chain issues. People want to buy and make stuff in the US. I think that it’s going to have to happen.

"Automation use will have to increase to offset the welder shortage and supply chain issues.”

Matthew Wolfe: One quick thing before we move on, we wouldn’t consider ourselves a cobot because cobots require a teach pendant and robot programmer. With Path, you just need someone to hit the Go button. But I’m curious, why cobots?

Thomas Lienert: The cobot revolution allows inexperienced people to do things that previously required lots of training and programming skills.

Traditionally, there's been a barrier to entry. Many fabricators have just been reluctant to try robotics because they think it's complicated. You need to have at least one person to program typically. I'm not an automation person, but my understanding is that for cobots, it's much simpler and you get some of the advantages that come with traditional robotics. It's not the full-blown robot like you (Path) have, but it's not manual, either. The role cobots fill is an intermediate solution. There's been a barrier for entry and many companies who don’t do enough parts feel they can’t justify it because they don't want to hire a person to do all of the programming. They would rather go out and hire a couple of welders because they don't want to put a welder out of business. But what happens when they can’t find welders to hire?

Matthew Wolfe: The next question we had was when visiting welding operations, what do you hear most from the people in the plants? Are there some themes that are universal? Thomas Lienert: The welder shortage is a pain, and everybody complains about it, but no one can do much about it. When I'm in the plants, I'll talk to the owners and managers. They just want to hire more welders, but they can't… and ask, why is that? Why can’t you guys (at AWS) do more about that? And the answer is, we can't make welders with 20 years of experience overnight. It’ll take over 20 years to create that sort of labor.

“The welder shortage is a pain…When I'm in the plants, I'll talk to the owners and managers. They just want to just hire more welders, but they can't…”

And right now, welders go through a very abbreviated quick training. Like, six to 18 months of training. And they are not trained in all the processes. In the old days, welders would know how to do all the different processes and do them well. That is now no longer the case. Usually, they go to learn a limited number of welding processes. It’s very expensive to train welders, especially in multiple processes. Today’s manufacturers pay much more for welders, with both inflation and the welder shortage being major drivers.

Matthew Wolfe: So, automation makes sense then. What do you see as the biggest obstacle for manufacturers looking at automation? What's in their way?

Thomas Lienert: The biggest obstacles to automation are perception and understanding. I hope our upcoming October conference will dispel some of the misunderstandings around automation putting welders out of jobs, or that automation is too complicated or expensive.

To this day I remember what my professor at Ohio State said 30+ years ago. He said, “Americans write papers about robots, while the Japanese actually put them into plants and use them.” In the mid-80s, there was initially a lot of bad publicity around automation. In those days, they would just pick up the manual welding process and drop a robot in. They didn't appreciate the upstream and downstream changes to processing that needed to be done right.

For example, a robot, unlike a welder, does not have eyes. A robot cannot “see” the wire going through the gap between the two plates and know something is wrong without some kind of sensor. Therefore, it is important to make sure your joint fit up and tolerances are close to where they should be. When problems arose years ago, “automation” was viewed as the problem. However, automation is (was) not a person and it had no bad intentions, it was just that the people using it did not fully understand how to make it work correctly. So, there was an initial barrier 35 years ago that made automation more difficult to sustain. Today, I still think many misconceptions about its abilities remain, about what it can do for you and how much it can save you. It may still not be the answer for everybody.

“There was an initial barrier that made automation 35 years ago more difficult. Today, I still think there's a lot of misconceptions about its ability…what it can do for you and how much it can save you.”

There are differences between the classic big 6 or 7 axis robot systems and the cobot world. I think the cobot feels like a step between manual and fully automated welding.

The other problem with automation is the operators. A lot of fabricators are not trained as welders or welding engineers – they may be machinists or mechanical engineers and they’ve opened a fabrication shop. They may do machining and sheet metal bending, and they also do welding. They just think, how hard can it be? It's just welding, right? If you have a worker who's just a programmer and has never welded - you are going to have problems. Cobots allow welders to use automation without learning lots of programming. You need people who know how to read the puddle and make sure that the arc on the robot is doing the right thing.

Matthew Wolfe: So, you’re saying you'll need both programming expertise and welding expertise during deployment of this welding robot or welding cell or is that ongoing?

Thomas Lienert: To setup traditional robotic systems, yes. The nice thing about automation is that once you get the program correct, you can make the same thing again and again, if you get the samples right and you have the right tooling and fixturing. There are the non-recoverable engineering costs though, right? Once it's set up, it's great. If I understand your question, it's during the setup, when you're making the program the first time that you need skilled technicians or engineers. Once just once you get set up and the programming right, the next whatever, 1000 or million parts will be just fine. So, once you moved into production, you don't necessarily need that same skill level for operators.

However, I have recently heard that your company, Path Robotics, has a vision system that can alleviate many of the programming and fit up issues. I am looking forward to learning more about the system at the upcoming Automation and Sensors conference sponsored by AWS.

Matthew Wolfe: One last question, how can Path or partners like us help AWS?

Thomas Lienert: Well, you are already being a super big help by agreeing to participate in our upcoming conference. If the conference is as successful as I hope it is, we can start spreading the message on automation being useful and maybe dispel some of the rumors.

There are several things that Path Robotics or others can do easily. If you aren’t already, you become an individual member of AWS or a sustaining member company. You can hire students to help the future of the industry. You can also contribute to the AWS Foundation. The AWS Foundation also matches funding for scholarships. So, you could consider a scholarship that would continue in perpetuity once it’s endowed.

Get your free copy of Path Robotics 2022 Manufacturing Outlook: 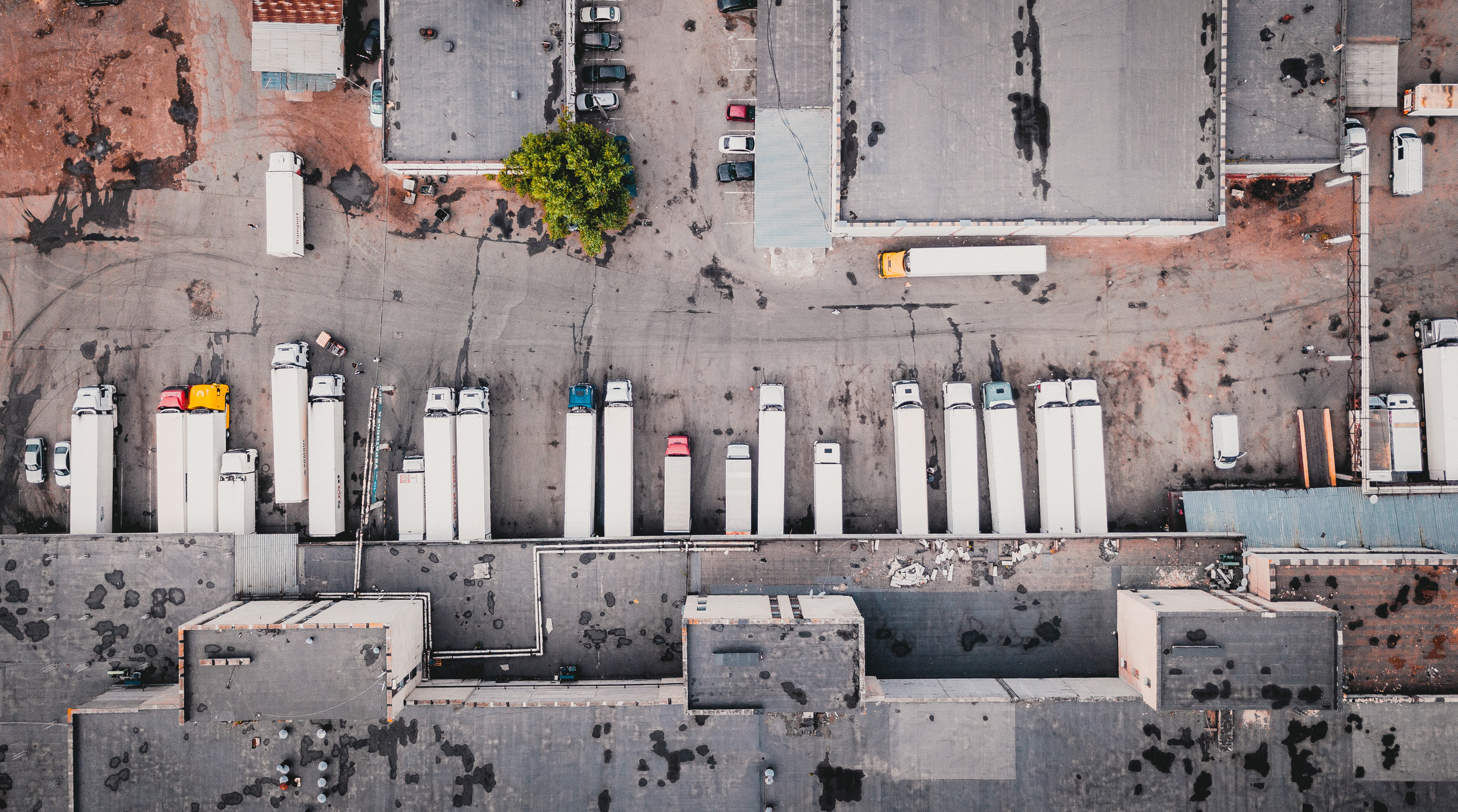 2021: The Year of Controlled Chaos In Manufacturing